How Much Should a Harvard Lotto Ticket Cost?

Recently there has been a lot of talk and a few lawsuits over the admissions practices of Harvard and the Ivy League schools in general[1]. Broadly speaking, some claim that the admissions process is less of a meritocracy than affirmative action based on race. I’m not going to go into the racism (or possible lack thereof) in the admission process of private instructions, but rather the meritocracy aspect. Harvard and other ‘top-tier’ schools make a concerted effort to establish that their admissions process is fair, balanced, and multi-faceted. However, it has long been suspected that though the admissions process may be these things, it also has an element of randomness to it. Perhaps it was the lack of sugar in the admin person’s coffee that morning, perhaps it was a very poor commute into work that soured someone in the office that day, perhaps there really is a random element to the admissions and they do actually pluck names out of a hat.

I want to focus on that random element and play a bit with some probabilities. Assume that you are actually applying to Harvard and they actually confess to using randomness in their admissions policies. Say that they still require a fee to submit your application. Today that fee is sitting at $75.00. Say that the ‘prestige’ of Harvard remains the same after this hypothetical confession to the use of randomness and that today’s median salary for a Harvard grad stays at ~$85,000.00/year. Got it, okay?

The questions then is: Should you apply to Harvard and hope to be a random applicant that gets in at the $75.00 price? Essentially, I am asking that if Harvard becomes a plain-old Lotto ticket, should you place a bet?

Let’s go through the math a bit then, shall we? First we need to know the odds of getting into someplace like Harvard. To me, that means an Ivy League school. Some may complain about Stanford, Oxford, UCLA, UT-Austin, and the like. But to narrow down the problem a bit, I’m just going to focus on the Ivies. All the Ivies publish their application numbers, the number of acceptance letters they sent out, and the number of students that actually came to school. Graduation rates are a bit harder to come by and I didn’t include them.

One confound with schools like these, is the ‘legacy’ admission. These are the progeny of graduates, and though all the schools deny that special considerations are given, the school newspapers howl about it constantly. Seeing as a ‘legacy’ admit is not part of the population that are ‘lotto’ players, I have removed them to the best of my ability.

Nice! We see that the average chance at getting into an Ivy is about 4.2% (+/- 1%). This is not the worst, it’s between 1 in 20 and 1 in 30, or thereabouts. As far as lotto games are concerned, this is right up there with the odds for a Wednesday night bowling alley lotto.

The next question is then what are the expected returns on a Harvard education. Fortunately, the Washington Post has a great article on the salaries for Ivies[2]. With these numbers, I will be taking the median salary as the expected salary for a random Lotto applicant for the rest of their life. Of course, however, Brown is not cheap to attend at about $71,000.00/year. The cost of 4 years of tuition should be factored in as well.

Note that I am only going off of the expected salary that a graduate can expect to earn from each intuition. This will not include earnings from the stock market with will likely make the expected lifetime gross wealth increase by a substantial amount. Also note that I am using a working lifetime of 38.5 years, the current expected average for babies born in the US in 2001.

To then determine the price of the ‘lotto’ ticket, you just simply multiply the chance to get into a school by the expected lifetime return:

Wow! College really is worth applying to! Look at the average there! That means that if the price of the ticket for an average Ivy is less than ~$100,000, you should apply. Especially look at Cornell: if the price of admission to Cornell is less than nearly $150,000, you should apply. Remember though, this is based on the assumption that the admissions process is totally random and that they don’t talk to each other.

One question I did get asked is what is the probability of getting into ANY Ivy if you applied to all of them. If the Ivy admissions process is indeed independent from campus to campus, it comes out to just be the sum of all the probabilities: a 33.7% chance. That’s better than 1 in 3! Getting into any HYP Ivy is 9.9%, about 1 in 10.

One thing to look at as well, is the graph of the price of the lotto ticket against the chance of getting into the school:

Look at that! As the chance to get in RISES, the expected maximum price of the Lotto ticket also RISES. The R2 is also good at 0.81; I’d say there is a real relationship there! This means that easier to get-into schools are more lucrative for you after graduation. Why this is may be a very hard question to answer, however: perhaps it’s the ‘networking’ effect, perhaps the children of more wealthy parents tend to choose easier to-get-into schools, who knows?

Another thing to take away is that UPenn is the most ‘worth it’ school, relative to all the other Ivies. It has the highest price for the Lotto ticket and the easiest chance to get into, relative to the line of best fit. Essentially, you want to look for the point highest above the line. Conversely, Brown is the least ‘worth it’ school, with the lowest price and a harder chance to get into.

I think this is why places like Harvard and the other Ivies are SO invested in making certain that their process is NOT random. At the VERY least, they must keep a ‘Wizard of Oz’s Curtain’ of objectivity for their admissions process. If not, then they could be expected to be flooded by 1000 times more applicants for each seat, making the process of admissions a much larger part of the school’s mission. Things would quickly devolve for their ‘brands’ and their graduates would likely have less cache in the world at large. Essentially, all the assumptions I made about salary over a lifetime would evaporate in about a year or two.

In Summary: If you have the extra cash for application fees, apply to every school you possibly can; it’s a great deal as far as betting and ROI are concerned. If you think that your odds of getting into Harvard are better than 1 in 1,197, then mow some lawns and take that shot; it’s worth the cash. Probabilistically speaking, college is worth every single last penny and/or Benjamin.

Update 20180710: I got asked a question on how the other fine institutions of this country stack up against the Ivies as well. So, I decided to take a peek at it. The best data set that I could reasonably find on this was US News and World Report’s eponymous list of colleges and universities. I took the top 25 Universities and the top 11 Colleges (minus a few that didn’t report some stats) and then graphed them all together. Note that some of the earlier analysis that I did was not really applicable to the other schools, so I just took the raw data for granted. Also note that the California schools have substantial discounts for in state and out of state students, however that discount did not count for all that much in the end.

This data is not all that informative in the end, but the graph of it should be a bit easier to digest. 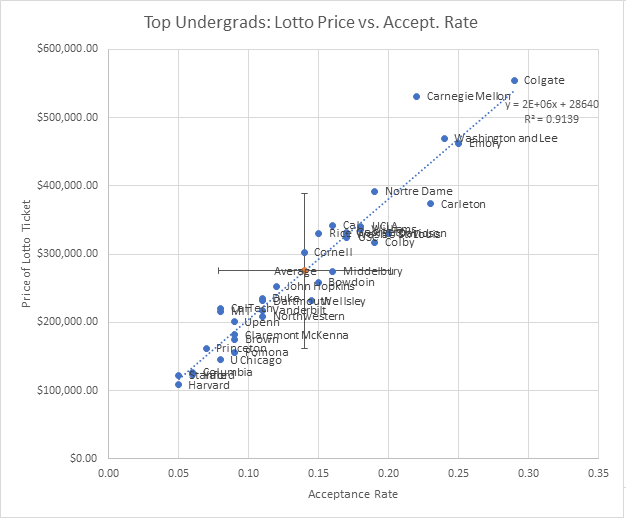 Well, that’s a bit of a mess with the labels, huh? I tried to get them to look better, but it ends up being even worse. Try messing with the data yourself a bit if you are interested as well. The take away is that, again, you should pay more for the lotto ticket to get into easier to get into schools. By far, the best school to do that is Colgate at nearly $555,000.00! At a $60.00 application fee, it is discounted at 1 to 9,245.93, an incredible steal. However, the schools that are best ‘worth it’ relative to the other elite schools are Carleton and Davidson, as they are the furthest under the line of best fit. A surprise is Carnegie Mellon, which is far and away above the line of best fit. This means that the school’s chance to get in is relatively low for the lotto ticket price, relative to the other elite schools. As an aside, if you were to apply for all these schools, you’d expect to get into very close to Five of them.

Again, go to college kids. The ROI is insane.

1 thought on “How Much Should a Harvard Lotto Ticket Cost?”

Leave a Reply to A WordPress Commenter Cancel reply